Just like it was with the first editor, all Chao settings are handled by easy-to-understand text menus. Run the editor like a normal VMU mini-game, move the selection arrow by using the up/down keys, select a list item by pressing A, then change the selected parameter or value by using the left/right keys. When you are done, confirm the new setting by pressing A again. If you chose the wrong list item or changed your mind and don’t want a new parameter or value to take effect, simply press B to cancel it, and you will be returned to the previous menu. Also, a small arrow at the top and/or bottom of the screen indicates that there are more list items to choose from in those directions.

After you have set everything to your liking, return to the Starting Menu, choose SAVE DATA, and your new Chao will be saved and is ready to be released into the Chao Garden. If you want to create another Chao, simply start the editor again and choose RESTORE, then the Default Chao Data will be re-created from a backup.

Warning: Once you have saved Chao Data in the editor, you will not be able to upload it to the Chao Daycare on the Sonic Adventure 2 Gamepage anymore until the Chao is reborn again (please check out my Questions & Answers section for info how to bypass this).

Uploading a custom-raised Chao into the editor and modifying it there is also possible. First remove any Chao from the editor (either by releasing the Chao into the Garden or by choosing DELETE, then put the Chao that you want to modify into the Chao Transporter. And don’t worry if you only want to ‘have a look’ at your Chao; no changes will take effect until you explicitely save the new data.

Although it doesn’t change the language of the editor, this option is more important than you might think. When you release a Chao into the Garden or try to upload a Chao into the editor and the LANGUAGE CODE setting doesn’t match the selected language in Sonic Adventure 2, the game will always ‘update’ the VMU file by overwriting it with a version of Chao Adventure 2 that matches the language used in the game, thus destroying the editor. By selecting a matching Language Code, you can prevent this from happening.

Depending on which sort of animals you give your baby Chao, it will evolve into either a SWIM, RUN, POWER or FLY Chao when turning into an adult (if you don’t focus on any special category of animals, the Chao will simply turn into a ‘Normal Adult’). Also, depending if a good or bad character cares for the Chao, it can also evolve into either a Hero or Dark version of the above types.

Basically this means that beside the already-known Chao-types from Sonic Adventure 1, we now also have a Hero and Dark version of each type, which can all be selected from the CHAO TYPE option in the editor. There is also a HERO/DARK MOD for baby Chao available, which lets you choose if it will turn to the Hero or Dark side when maturing.

The new animal categories are listed below:

For changing the appearence of a Chao, only the first four categories are important, as it was in the previous game (Chaos Drives with the above colors have the same effect, but without adding animal features to the Chao).

Depending on which sort of animals you give an adult Chao, it will slowly change into those really special Chao, like for example a NiGHTS Chao (similar to the first game). This can be set under the option BODY MODS in the editor.

Like before, Body Mods consist of three values, the first two representing the types and amounts of animals that you gave your Chao, the third one representing the change rate. The first Mod can either be RUN or POWER, and have a value of 0 (no animals given) to 20 (as much animals of that type given as possible). The second Mod can either be FLY or SWIM, and also have a value of 0 to 20. The Change Rate indicates how much the effects of the given animals are visible on the Chao. 0 means that the effects are not visible at all, 14 (maximum) means the effects are fully visible (Mod values are simplified in the editor, so people who don’t know much about Chao Internals can use them too).

And as usual, here’s an example: to create a Hero NiGHTS Chao in the editor, first choose FLY HERO as base type (meaning that the Chao mainly got animals of type FLY as a baby), then set the FLY Body Mod to maximum, the other Body Mod to 0 (meaning that the animals given to the adult Chao were also mainly of type FLY), and a Change Rate of 14 (effects fully visible). 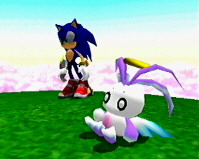 If you know the correct ‘recipe’, you can create all sorts of Chao you want in just a few seconds.

In addition to the Body Mods, you can also select special Chao appearences under SPECIALS, to get truly original Chao that wear masks, don’t have a headball, and lots more. You can even create an OmoChao or turn the Chao into a game animal. ;) 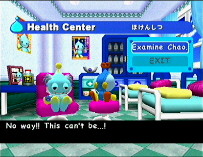