All Chao settings are handled by easy-to-understand text menus. Run the editor like a normal VMU mini-game, move the selection arrow by using the up/down keys, select a list item by pressing A, then change the selected parameter or value by using the left/right keys. When you are done, confirm the new setting by pressing A again. If you chose the wrong list item or changed your mind and don’t want a new parameter or value to take effect, simply press B to cancel it, and you will be returned to the previous menu. Also, a small arrow at the top and/or bottom of the screen indicates that there are more list items to choose from in those directions.

After you have set everything to your liking, return to the Starting Menu, choose SAVE DATA, and your new Chao will be saved and is ready to be released into the Chao Garden.

If you want to create another Chao, simply start the editor again and choose RESTORE, then the Default Chao Data will be re-created from a backup.

If you want, you can also upload your own Chao from the Chao Garden into the editor and modify them to your liking. To do so, first remove any Chao from the editor (either by releasing the Chao into the Garden or by choosing DELETE in the Starting Menu), then put the Chao that you want to modify onto the Virtual VMU Machine in the Garden and upload it. And don’t worry if you only want to ‘have a look’ at your Chao; no changes will take effect until you explicitely save the new data. ;)

To be fully able to use all features of the editor, it’s necessary to understand the basics of Chao Breeding. Generally speaking, there are 15 different animals in “Sonic Adventure”, which are divided into 5 color-coded categories, listed below:

Depending on which sort of animals you give your Baby Chao, it will evolve into either a SWIM, FLY, RUN or POWER Chao when turning into an adult (First Evolution). Those types can be selected under the list item CHAO TYPE in the editor (if you don’t focus on any special category of animals, the Chao will simply turn into a ‘Normal Adult’).

Depending on which sort of animals you give a Chao after its First Evolution, it will evolve into those really special Second Evolution Chao, like for example a so-called Sonic Chao or NiGHTS Chao. Those can be created with the list item BODY MODS in the editor.

Body Mods consist of three values, the first two representing the types and amounts of animals that you gave your Chao after its First Evolution, the third one representing the change rate.

The first Mod can either be SWIM or FLY, and have a value of 0 (no animals given) to 64 (as much animals of that type given as possible). The second Mod can either be RUN or POWER, and also have a value of 0 to 64. The Change Rate indicates how much the effects of the given animals are visible on the Chao. 0 means that the effects are not visible at all, 15 (maximum) means the effects are fully visible (Mod values are simplified in the editor, so people who don’t know much about Chao Internals can use them too). 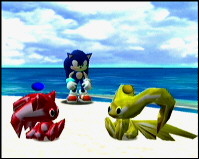 Body Mods also have effect on Baby Chao. For example, if you choose a high FLY Body Mod for a Baby Chao, it will turn into a First Evolution FLY CHAO when maturing (although it’s probably easier to simply select this form from the CHAO TYPE list.

Experiment with the values to get more familiar with their usage. For example, choose a lower Change Rate or a lower Body Mod value to get a Chao with less evolved features, or combine two different Mod Types.

The meaning and usage of the other editor options should be obvious.