Forum games such as "corrupt a wish" and "rate the above poster" can be played in this forum.
This is also the area for casual chat topics.
Chao Points and post counting are disabled in this forum.
Warning! This topic is 5 years and 5 months old! Please consider opening a new topic rather that bumping up this very old post.
Locked
24 posts • Page 1 of 1

Welcome to Windows 2000 Simulator 2001! Surf the Web, play games, use paint! The possibilities are endless! Your wish is my command!

The Year is 2001. After much consideration, you have done away with the household's old Windows 3.1 computer and invested in a new computer with Windows 2000 Professional installed. "Wow." You think to yourself. "I've missed out on 1996.9 installations of Windows. Technology has sure left me in the dust." With a whopping 512 MB of RAM and an 8 GB hard drive, you power on the machine for the first time. 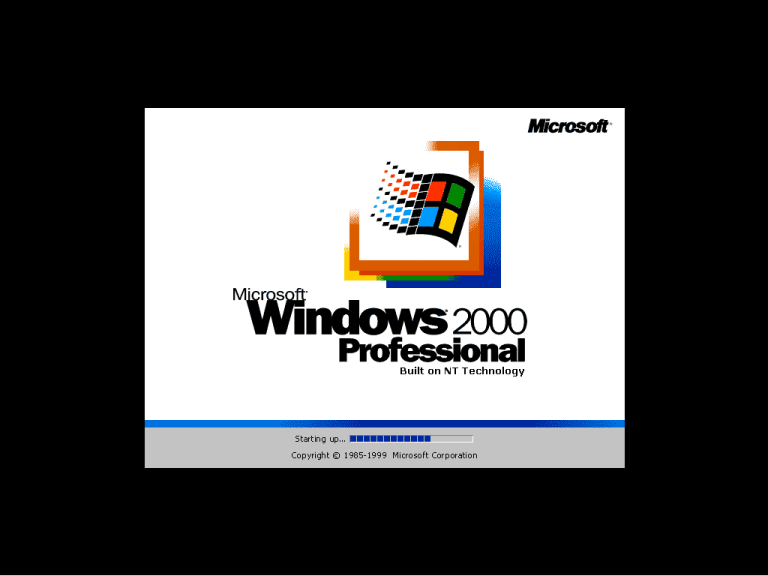 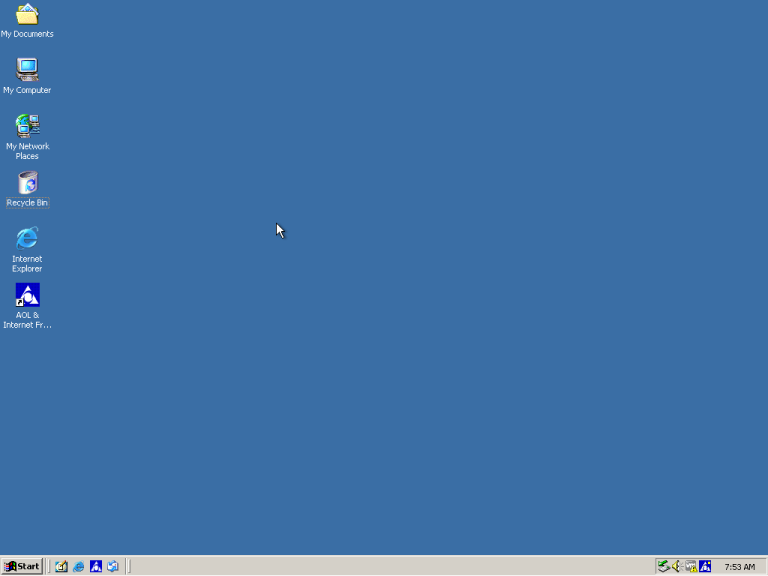 What's this? It seems that AOL has already been installed on your computer! Good thing you've been saving those dial-up trial discs that you've been finding in your cereal. Darn packages would always drop into your cereal bowl, making a mess. 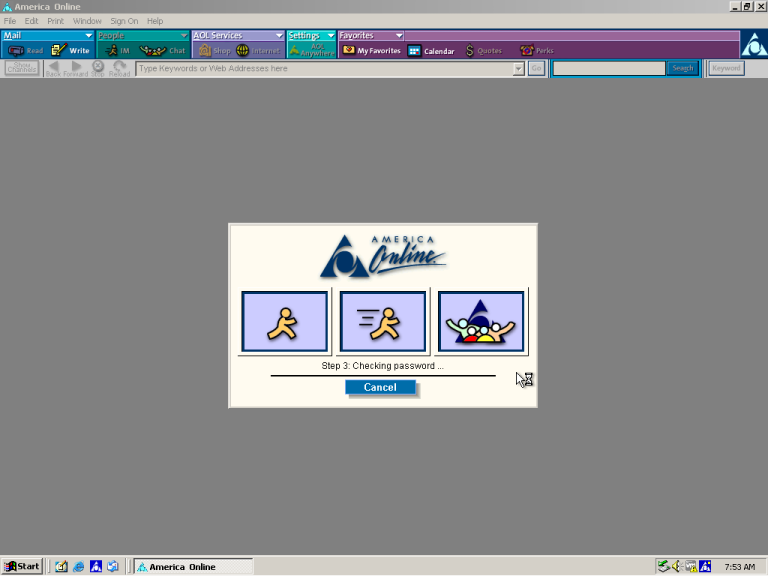 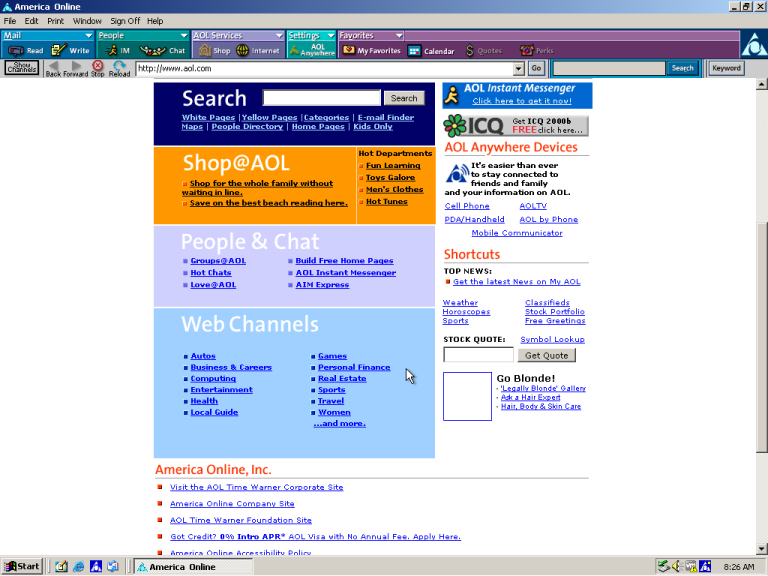 Right, after sacrificing your hearing and putting in your personal information, you have successfully connected to the world wide web. Congratulations.

What will you do?
Avatar Source
Top 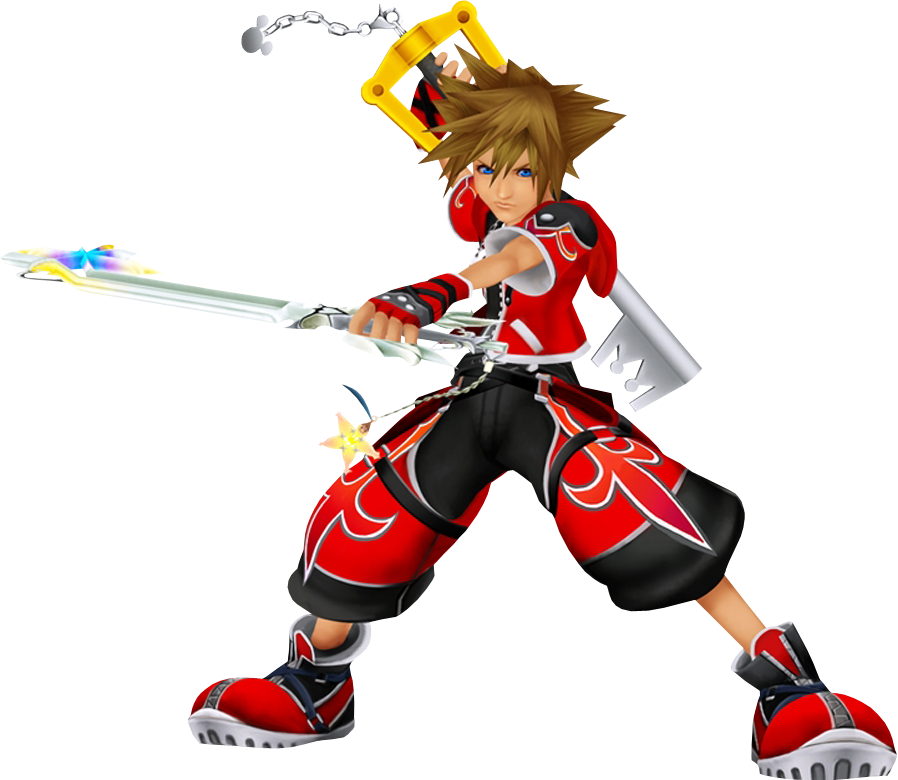 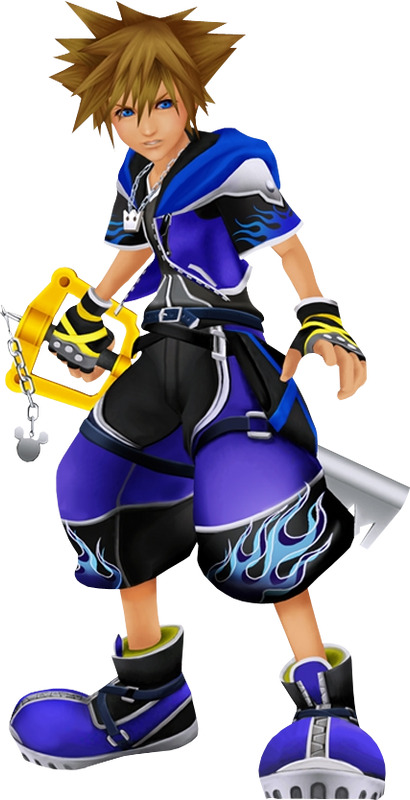 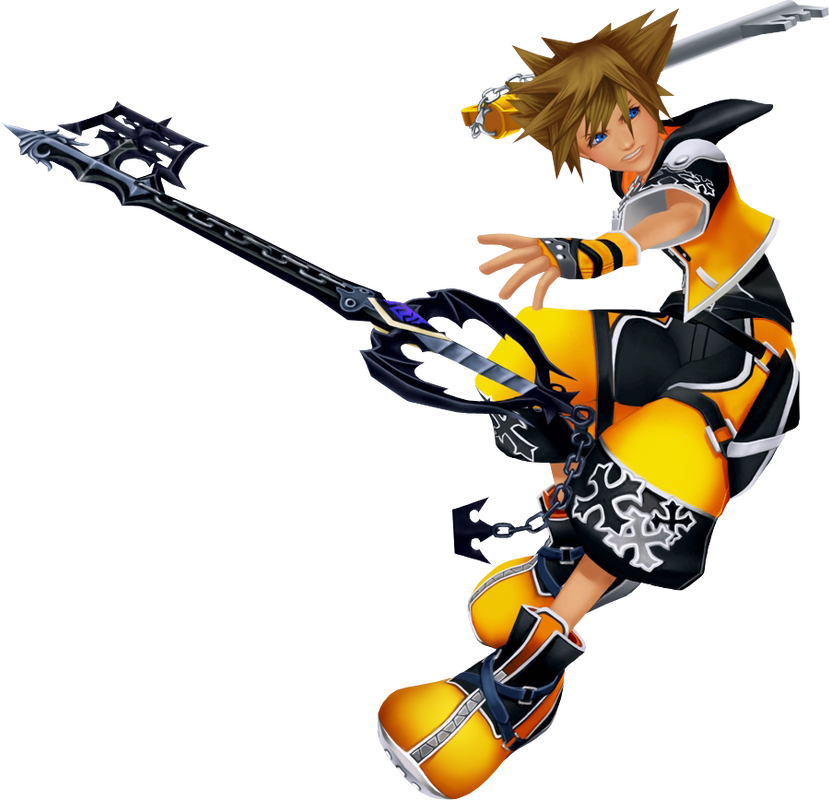 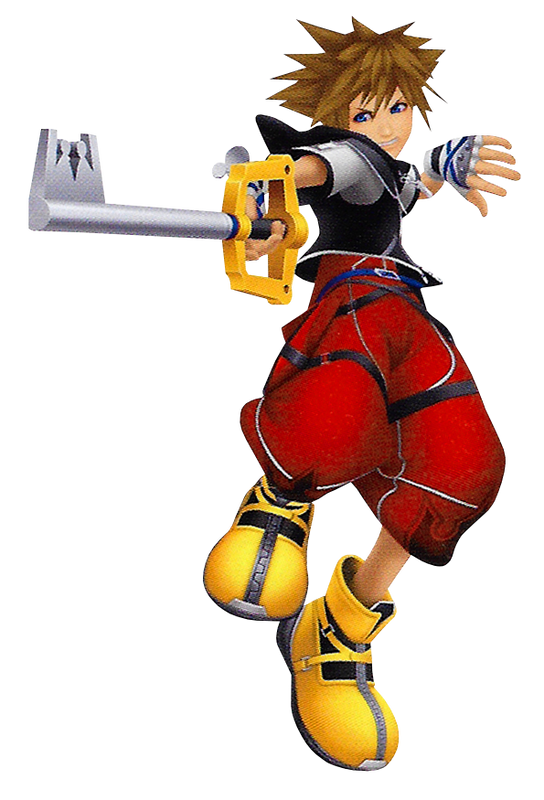 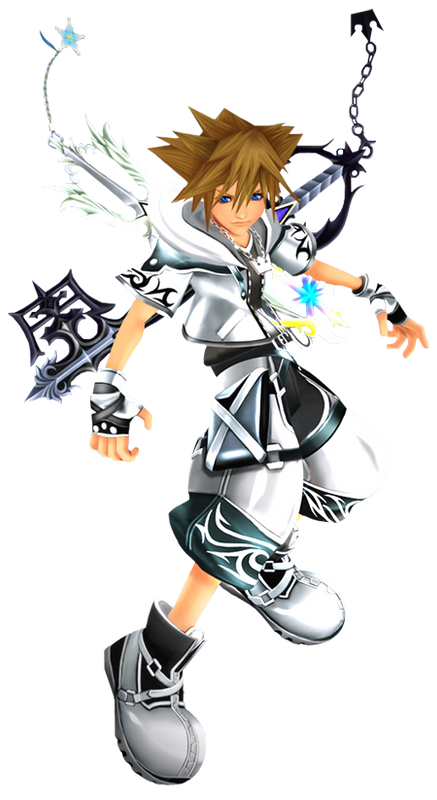 Emulate a what? A GameCube? Isn't that Nintendo's newest home console? Let's see... Let's go to Nintendo's website and get some info on that. 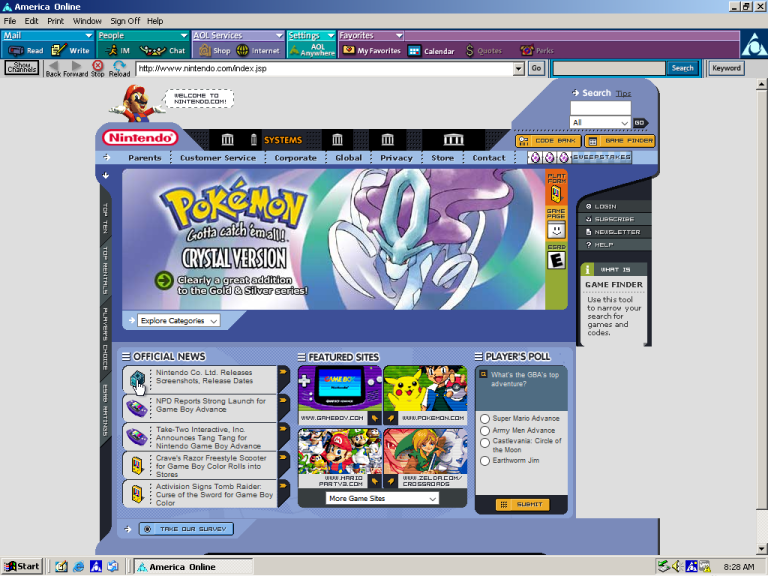 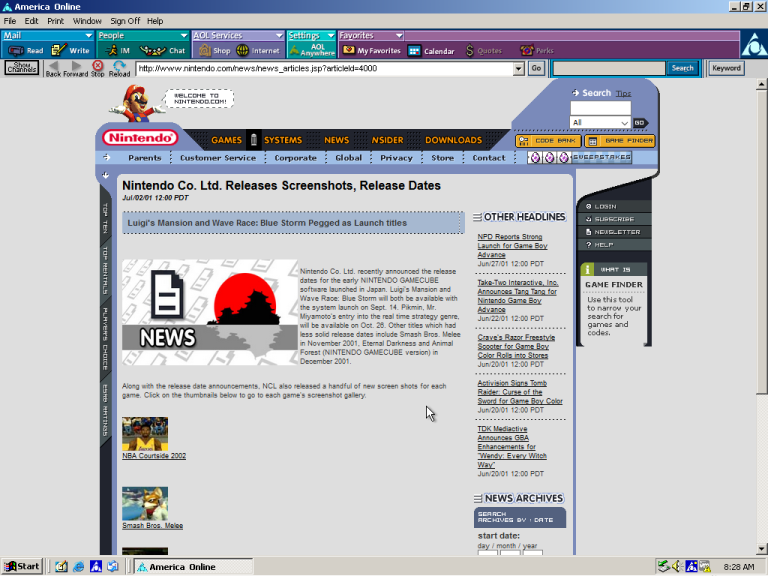 Now how are you supposed to emulate a console that hasn't even come out yet? It's still got a few months to go, and besides, it's your first time on the internet. You don't want to be breaking the law yet. Baby steps first!

Alright, if you insist... 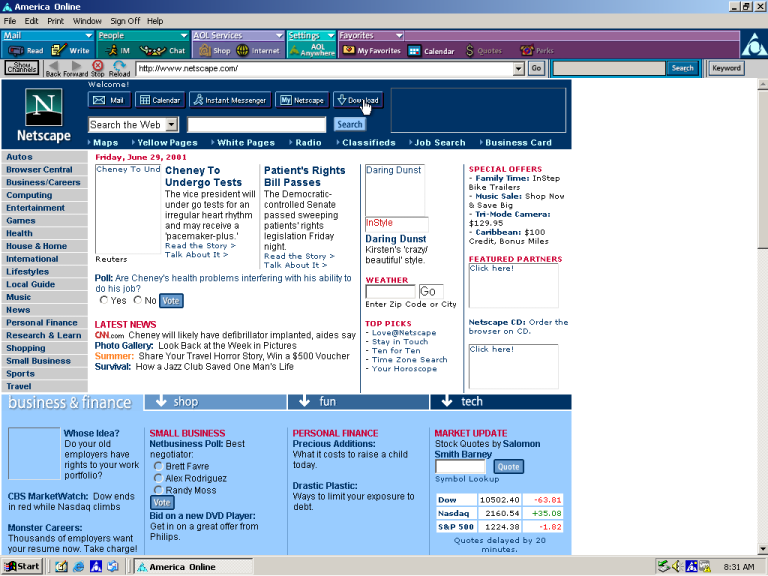 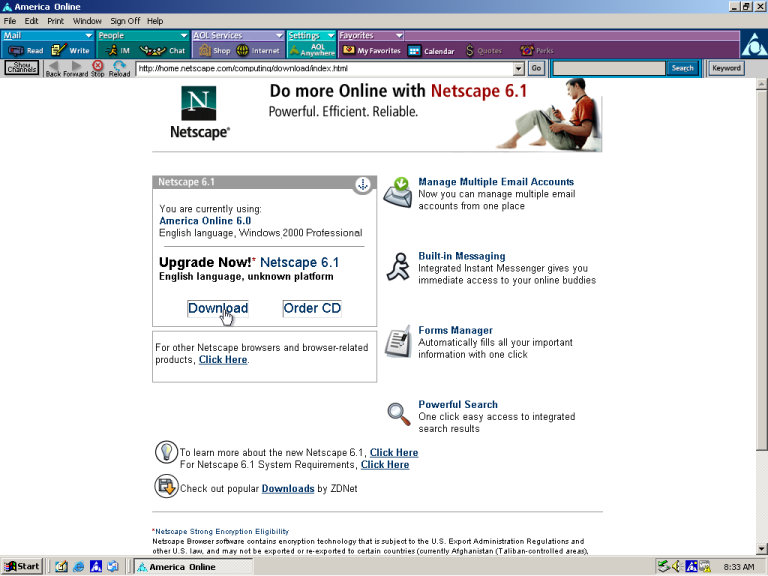 You wait an hour an a half for the browser to download and install. It would've taken half that time if SOMEONE didn't pick up the phone! 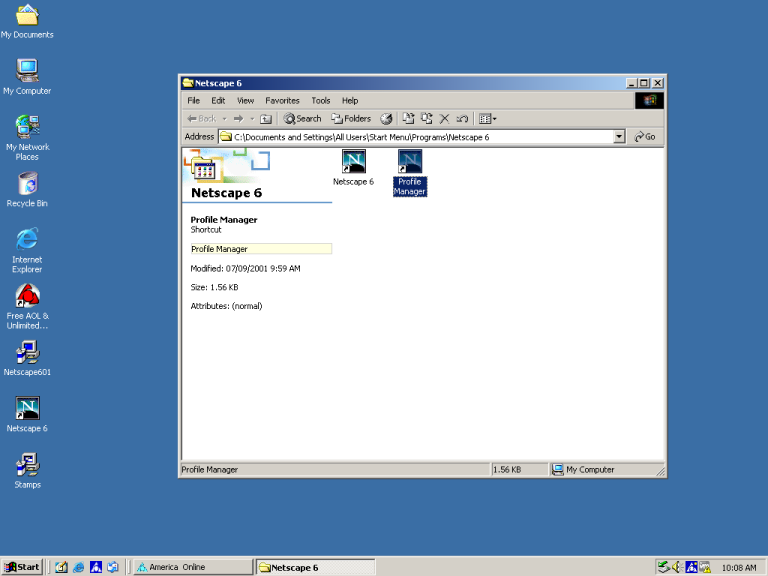 get a bonzi buddy so ur not lonely

Lord Spiritomb wrote:get a bonzi buddy so ur not lonely

Somebody got my idea 15 minutes before I got here. I second that motion.

Download a "Gamecube Emulator" anyway. Surely you want to get early access, don't you? I'm sure it's not fake! I'm sure it will really be an emulator! And you have Bonzi to protect you from the law!
Top

Play Zork while waiting for the latest Debian Linux to download.
Top

Play my Muppet Kids CD-rom game, since that picture of a betta fish I wanted to put a top hat and monocle on in paint failed to download because I decided to order chinese food over the phone.
Fedoras and umbrellas will always stand beside me!
Top 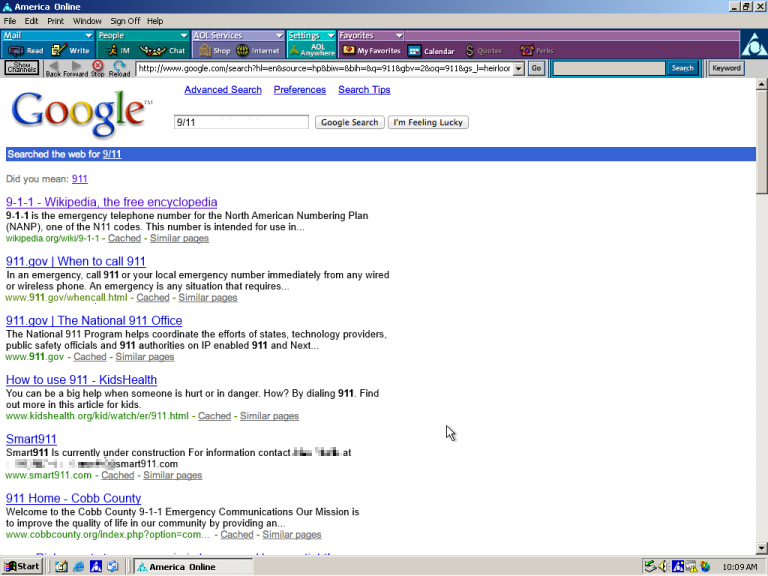 Uh, okay. You try out this site called google and search for 9/11, for some reason. You weren't sure what you were expecting.


Lord Spiritomb wrote:get a bonzi buddy so ur not lonely 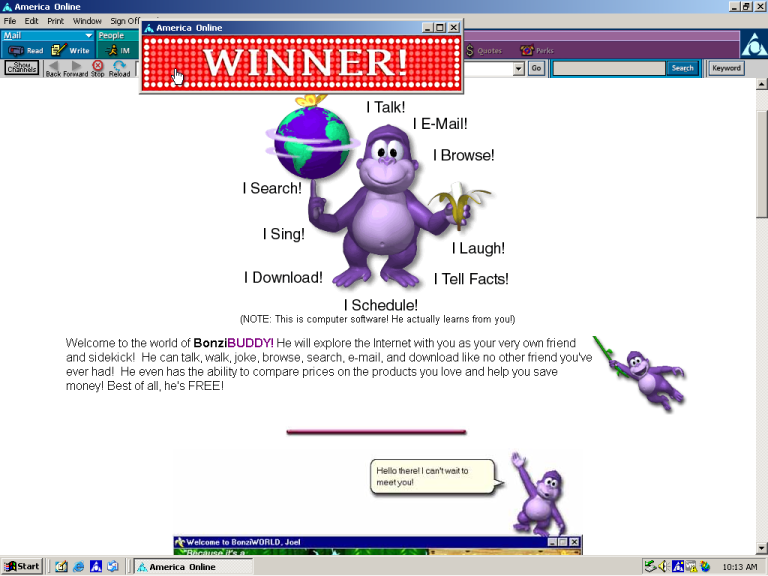 Okay, so you google BonziBuddy and click the first search result. Eww... Why would you want to befriend a butt ugly ape like that? Oh look! You won something! 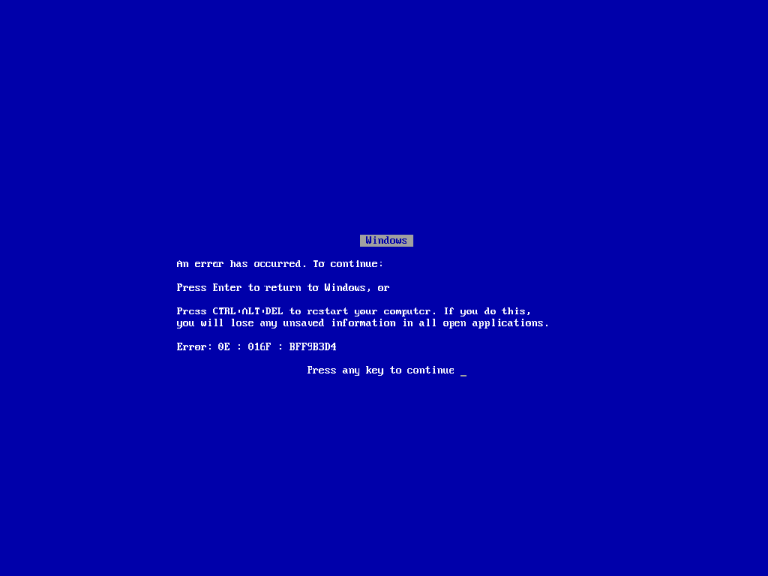 Uuuh... something tells you that you shouldn't have clicked that. 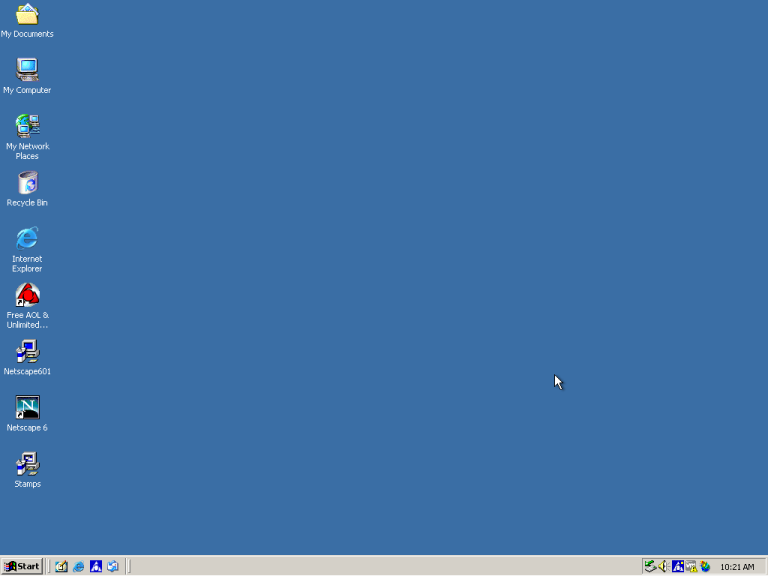 After an oddly slow reboot, you're brought back to your desktop. It looks like you got off scott-free this time, but from now on, you should be more careful. You don't think you're going to go to that website again anytime soon.


Pufflehugs wrote:Download a "Gamecube Emulator" anyway. Surely you want to get early access, don't you? 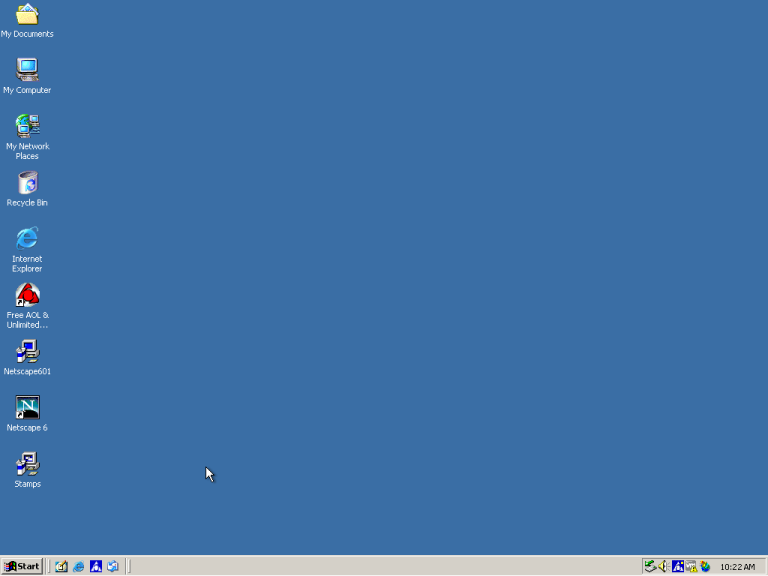 Fool me once, shame on you. Fool me twice... You are perfectly content with waiting a few months for the new system.


Dr. Roivas wrote:Quick how much pornography can you fit on this thing before the cops are notified 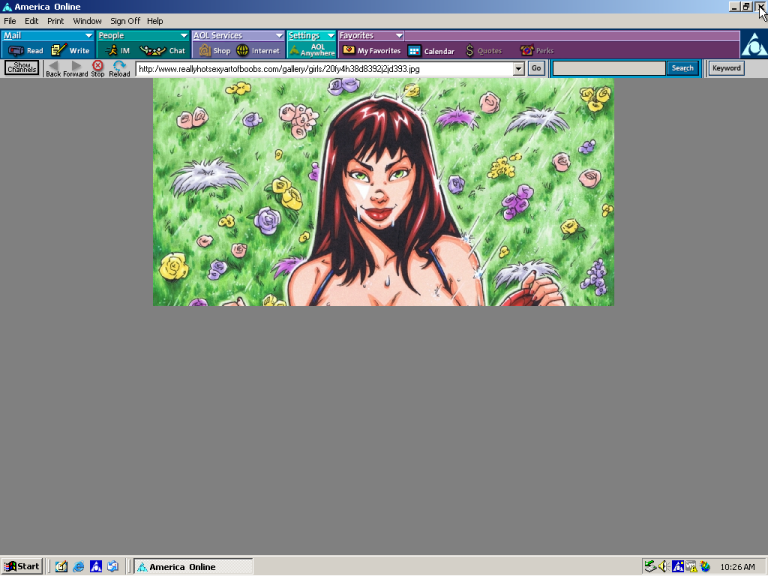 Don't be silly! Pornography is perfectly legal where you live! Ugh, could this load any faster? Forget it. 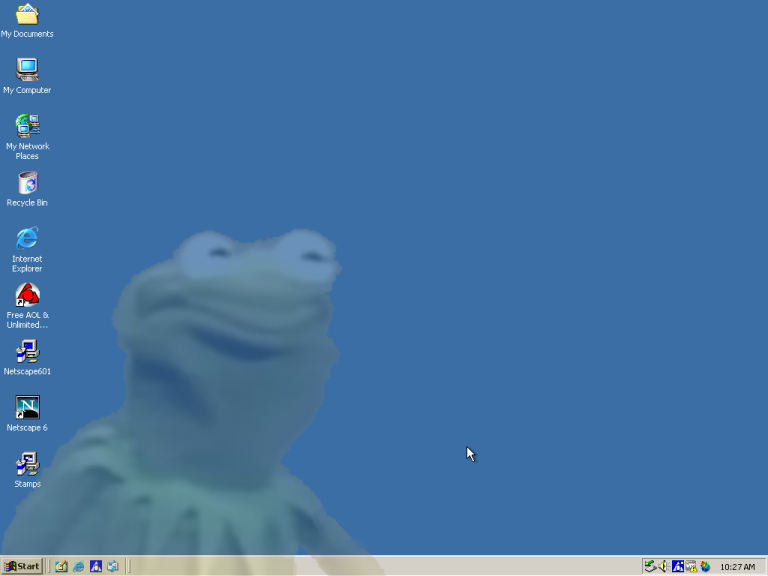 You do not have a Muppet Kids CD-rom game. Even if you had money to spare after your recent purchase of this computer, you don't think you'd be interested in buying it. 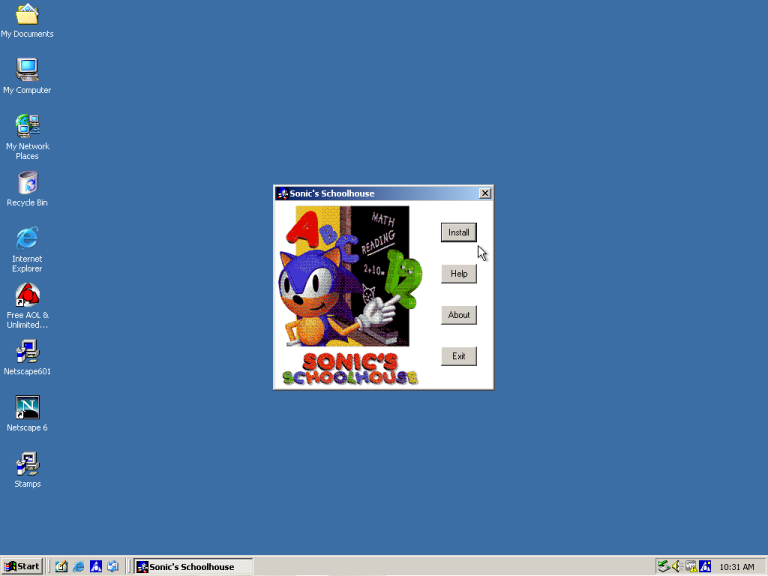 Again, you're broke. Besides, you already have Sonic's Schoolhouse! It's (unfortunately) one of the only PC games you have left in playable condition. To say the least, you didn't take very good care of your CDs in the 90's. You got this as a Christmas present in the mail from a relative who barely knew you. I guess he or she thought you were a lot younger. Out of sheer boredom, you put it in your machine. 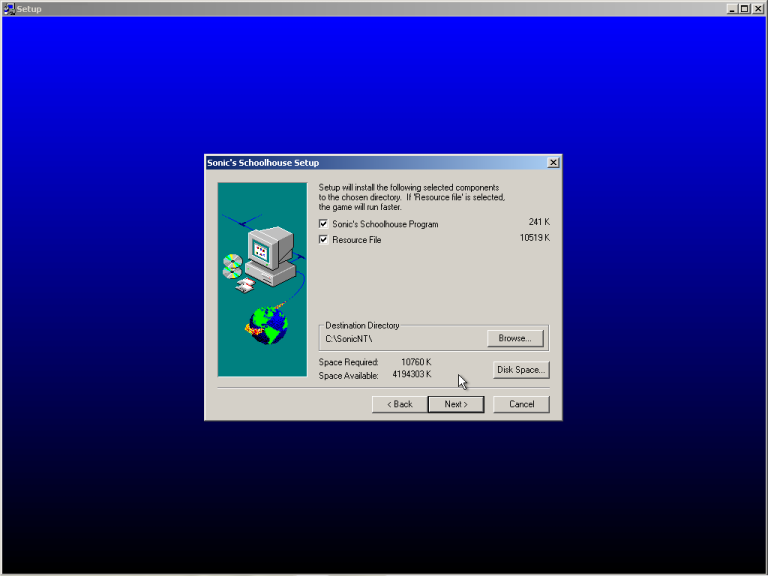 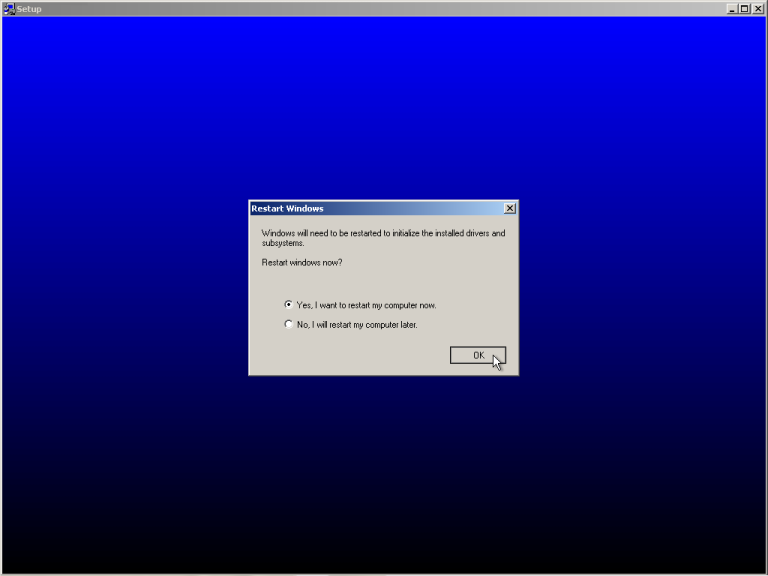 Gosh darnit. You have to restart again?! 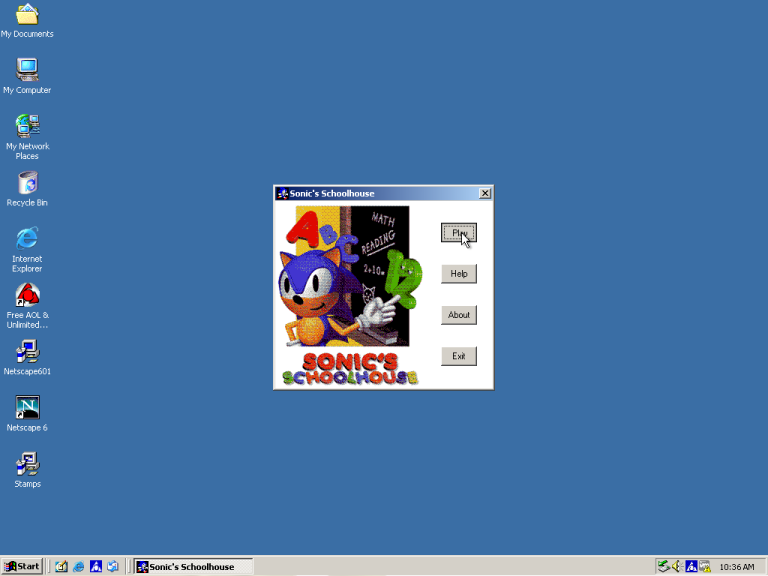 After yet another reboot, you're met with the launcher again. Whelp, here goes nothing...

((Side notes: I skipped Jeffery's command since I don't think I would've been able to pull it off (JmT's was hard enough). Enzo and Midnite's will be done eventually. In the mean time, keep the commands coming!))
Avatar Source
Top

Well fine then, if I can't get my early access then at least download a Dreamcast emulator!

MSPaint me a picture.
Top

Go on Chao Island and start spamming the forum
Top

Go on Sonic fanforums to talk about how the latest comic arc was dumb and how your oc would make it way better.
Tumblr | Steam | Twitter | Song of the week: Alice Nine - Tsubasa

open up microsoft word and write a letter to yourself to read in the future! (later today)
Steam: crazyenzo03 - Discord: Enzo03 #2547
Top

Sorry I haven't been updating. I've been sorta kinda sick (don't wanna get into details 'cause it's gross), and have been aching too much to want to work on this. Time also kind of flew for me, but I should be getting back on track soon enough.
Avatar Source
Top

Will this ever be updated?
Top

Maybe if you stop bumping it it will.
Tumblr | Steam | Twitter | Song of the week: Alice Nine - Tsubasa

Return to “Forum Games and Chat”