For all discussion about your usergroups or clubs. If you want to join a usergroup, or find members, this is the place to go to!
Chao Points and post counting are disabled in this forum.
Locked
3213 posts

I haven't been keeping up with the show all that well, despite how good it's gotten compared to Season 3. I freakin' love the Breezies. Though. <3 The episode where Applejack got overprotective was kind of stinky though. She was way too out of character in that episode, which was a shame since where was quite a bit of action in it near the end.
Avatar Source
Top

I don't blame you. She kinda was acting out of character there, so personally, I give that one 8.5/10.

The most recent one was pretty good, though.
Friend Codes - Youtube - Steam - deviantART
"I have returned from the grave to give the living haircuts." -TF2 Soldier
Top

I've gotten some more ponies :3
http://www.strawberryreef.com/images/Po ... hasbro.jpg A So-Soft Baby pony named BrightNight. Interestingly, she has a huge controversy because she's a very religious pony. Her backcard mentions that she says a prayer before bed, and when you squeeze her hoof she says a bedtime prayer. "Now I lay me down to sleep; I pray the Lord my soul to keep. May angels watch me from the skies, Until the morning when I rise." She was released in 2002 as a Bedtime Blessings pony, exclusive at Walmart in America and Kmart in Australia.
Mine...unfortuantly had a few faint crayon marks on her muzzle.
Also, it was hard to find this pony because there was also a G1 pony called BrightNight that has sparkly blue bows all over her body as a cutiemark.
http://mylittlewiki.org/w/images/thumb/ ... otaloo.jpg G3 Scootaloo-minus the pink hat on the image. This is Favorite Friends Wave 2 from 2008.
http://www.mjstoy.com/images/81gwsMpacgL._AA1500_.jpg I got this little RC remote controlled airplane, but not 3.5 Rainbow or StarSong. I've noticed that G3.5 ponies actually have a heart shaped hole in their hooves to keep them in vehicles instead of normal circles. Because of that, older/newer ponies can't use them. Just 3.5 can.
http://1.bp.blogspot.com/-opepXEJgVGo/U ... 1600/1.jpg Funrise Rarity plush. I don't really like this kind of plush, as it seems like they didnt even try to copy the hair styles. This looks almost like when Rarity got into the Poison Joke...
Like really, look at some of the works of DeviantArt doll makers. They can make Rarity's hair perfectly! :O
http://i01.i.aliimg.com/wsphoto/v0/1639 ... Little.jpg The Ty Beanie Fluttershy is better in quality than Funrise, as it actually has nylon hair like actual brushable ponies.

So, now that it is over, what does everyone think of season 4?

Overall, I thought it was much better than Season 3. I was fearful that the locked chest was going to end up as an aborted arc, but the reveal that the Mane Six had been collecting the keys all along without even knowing it really helped pull things together. Also, while I'm not a fan of the Olympics or its parodies, I quite enjoyed the build up to the Equestria games, which gave me the same vibe the build up to the Gala in season 1 did. Also, upon looking up Tirek, I must applaud the writers for the various nods to the franchise's roots in the finale.
Top

Wow, Tirek came back.
Edit: However, his 'brother' was actually a prince that was transformed into a monster in the G1 pilot, and wasn't punished. He regained his kingdom that was captured by Tirek.
so now from the G1 pilot..we have
Season 1 pilot
*the broken bridge
*rough river that was needed to pass
* humans (meh with the Equestria Girls movie..it would be cool to see some 'realistic' humans and not the techicolor pony-humans)
*Rainbow of Light
*Purple and green Spike
Season 4 finale
*Tirek
Now we just need someone to turn the ponies into monstrous reptile-horses and seaponies. Shoo-be-doo~

Just wondering, are there any older ponies that you guys would like to see be revived in the show or toy line? I would love to see Toola-Roola again.

Her unique rainbow hair and white/pink (sometimes white or pink depending on the toy) body haven't been seen since G3 as far as I can remember. Plus she's an artist pony, and there haven't been many artist ponies in G4.

also something I found while looking at older ponies.. 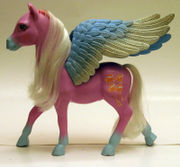 so there are MLPs with splashes of color! It's a Dream Beauties pony named Skyflyer. ...and it matches my pony oc in color and almost in placement. :u

I may be late to the party, but hands down, the S4 Finale is the best by far. Hell, I think it even blows S2's right out of the water. I like how they made Tirek very menacing, and for a surprise he even turns on Discord and drains HIS energy. Also, who can argue with the fact that the battle between Twi and Tirek was awesome? Especially that it looked like something from DBZ.

Also, 2015 for S5...Damn, long wait. In fact, anyone else noticed that these waits just keep getting longer and longer?

Also, inb4 this appears in Season 5.
Spoiler:
NOTHING CAN STOP THE SMOOZE.
Friend Codes - Youtube - Steam - deviantART
"I have returned from the grave to give the living haircuts." -TF2 Soldier
Top

I wonder what they have installed for the goo thing. Is it gonna be like how Spongebob dealt with goo? I don't even know. It's just as guess. Not like it's happening for sure.
Friend Codes - Youtube - Steam - deviantART
"I have returned from the grave to give the living haircuts." -TF2 Soldier
Top

I watched the first two episodes of My Little Pony: Friendship is Magical.

Im just...um...throwing it out there. This show is really good. Like...really.

where have you been
Top

I was so tired of partying.