General stuff to do with the blue blur! Talk about him, his friends, the TV show, whatever you like!
Post Reply
4 posts • Page 1 of 1

It is established in the early Sonic games that the ancient civilization which possessed the Chaos Emeralds was located on West Side Island.

Sonic 2 manual wrote:[The Legend of West Side Island]
They say that a very long time ago, the people of this island used mysterious stones to advance their civilization, and they achieved great prosperity. However, when those people tried to use the stones in the wrong way, their prosperity vanished overnight. After that, they say that the gods sealed the stones away somewhere on the island.

As we know, Angel Island was part of the landmass from which this civilization spread, and it was when the island rose into the air that the ancient civilization vanished.

Sonic 3 manual wrote: Sonic, who had been taking a nap, found a small ring washed up on the shore around that same moment. The ring had what appeared to be ancient letters carved into it. As he held this ring, Sonic remembered an old legend he had heard about an island. A long time ago, when this island had still been a part of the continent, people of a great civilization lived there. This civilization had created a society of peace and abundance with the energy of the "Stone of Power". However, one day a sect of wise men attempting to take the energy of the "Stone of Power" for themselves accidentally let the energy run out of control. The civilization collapsed in an instant, and it disappeared from history altogether. After the incident, the gods, descending from the sky, rebuilt the civilization's land as an island and released the "Stone of Power" into the sky…or so they say.

Now Sonic Adventure shows that Angel Island was originally located in what is now the Mystic Ruins. The crater surrounding Final Egg appears to have formed when Angel Island became airborne. 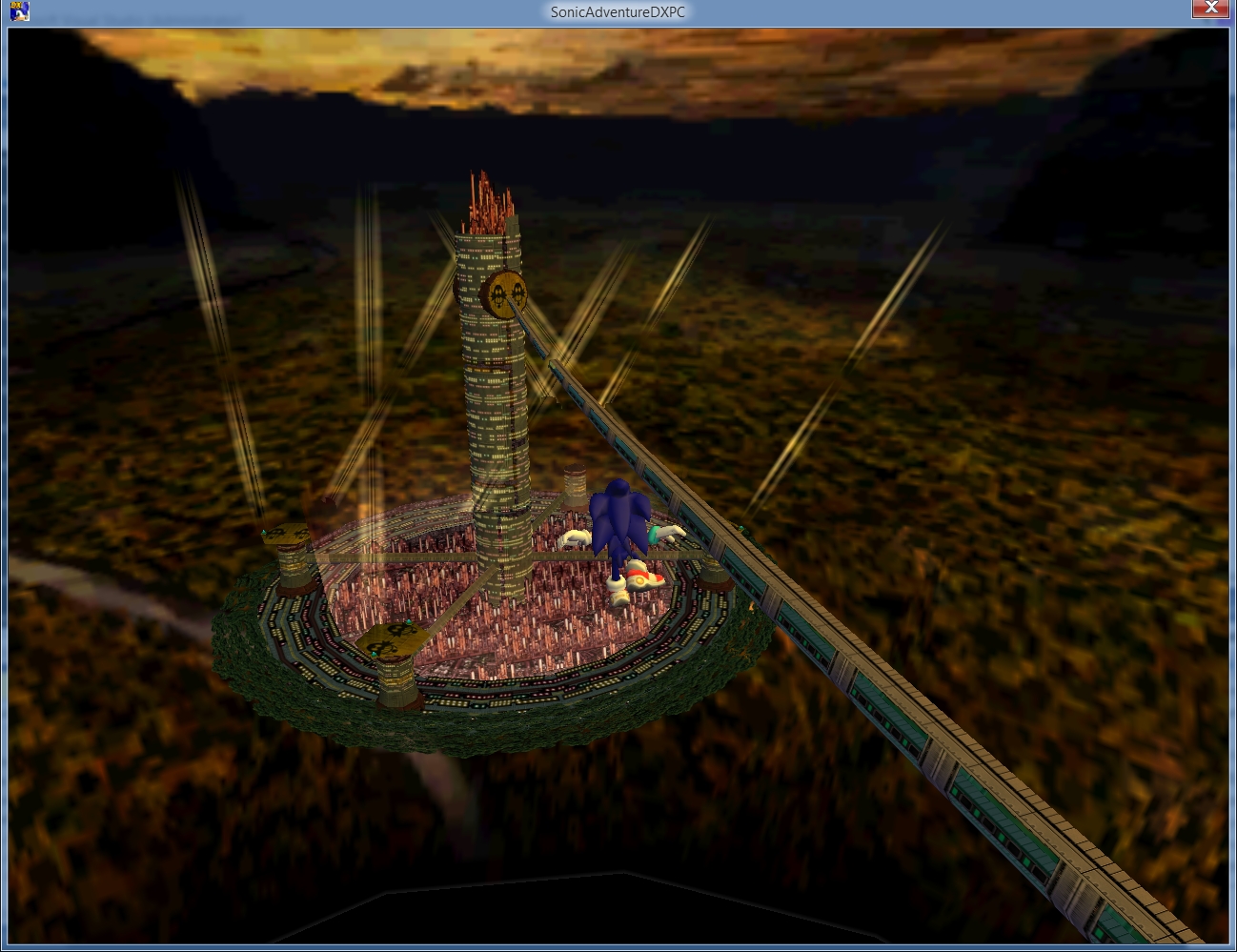 Now in Sonic Battle Tails is shown living in Emerald Town, a small urban area near the beach, which is depicted as being in easy travel distance from Central City. Emerald Town sounds a lot like a place that might be found in the Emerald Hill Zone, one of the Zones on West Side Island. Emerald Coast from Sonic Adventure is another similar area, which we know is within easy travel distance from the Mystic Ruins/West Side Island. These details suggest that Sonic Battle indeed occurs on West Side Island as well.

According to the Sonic 1 manual and SEGA Technical Institute documents, South Island, the location of the first game, floats around on the surface of the ocean. At such it cannot be found consistently on a map; it changes location over time. The Floating Island, of course, does the same thing. West Side Island however shouldn't have this problem, and since it has been featured as a location multiple times throughout the series, we should have enough details to map it's location in the Sonic universe.

Our first clue is Sonic 3's statement that the island the ancient civilization lived on was once part of the continent. Our second clue is Sonic Battle's depiction of the island as being close to the United Federation's capital, Central City. Now the capital first appears in Sonic Adventure 2 on the far left hand side of the game's stage select map:

Here we see the bridge connecting Central City to another urban area on an adjacent landmass. The same landmass encompasses the Echidna ruins where Eggman's pyramid base is located. These pyramids are precisely like the ones in the Sandopolis Zone on Angel Island. From this we can deduce that SA2 also occurs on West Side Island. The urban area connected to Central City is most likely Emerald Town, the desert is part of the Mystic Ruins (in fact it fits as an extension of Sand Hill), and the landmass Central City is on could be the continent the island separated from.

Central City returned in Shadow the Hedgehog. In this game we see a map of the world in GUN's base as they monitor the Black Arms invasion: 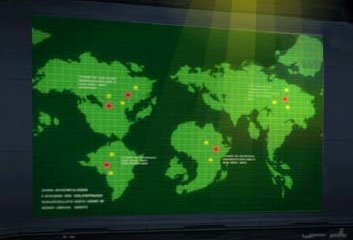 The red dots represent five of the six major cities attacked by the Black Arms. One of these red dots is the United Federation capital. If we follow the map from SA2 we know the capital is located on a peninsula west of a large island. It happens that the topmost red dot on the left hand side of the map is close to a peninsula nearly touching a large island that looks very much like it was once connected to the mainland. I think we've found West Side Island.

Following this line of reasoning, I think we can place most of the locations in Shadow the Hedgehog on or near West Side Island. Death Ruins are most likely located near the Mystic Ruins; Westopolis is stated in game to be near Death Ruins so it is also on West Side Island. Iron Jungle would be in the jungle surrounding the Mystic Ruins. Circus Park could be some where in the proximity of the Casino Night Zone. Cryptic Castle fits right in with the Pumpkin Hill area. Other places like Glyphic Canyon or GUN Fortress might be anywhere though.

Sonic Chronicles has a world map featuring the Green Hill Zone, Central City, and the Mystic Ruins as a cluster of islands in the west and Station Square on another island in the east. 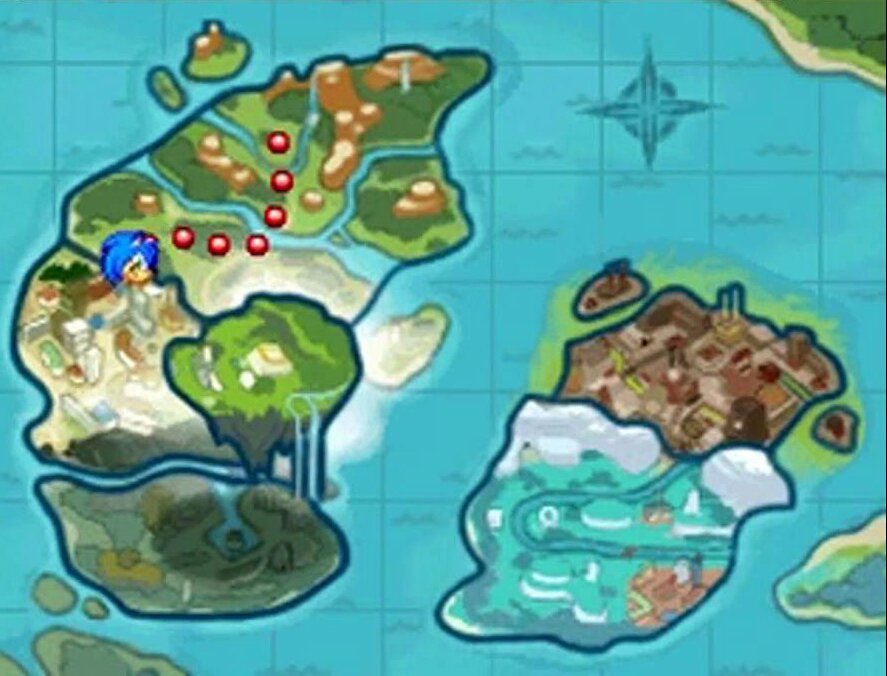 Since this map is only seen by the player as a means of navigating between zones, I don't think it needs to be interpreted as a literal depiction of Sonic's world the way we do the in-story map seen in the cutscene from Shadow the Hedgehog. We can for example ignore the idea that Central City is on an island. It is consistent in depicting Central City's proximity to the Mystic Ruins/West Side Island however. South Island moves from one location to another so the Green Hill Zone's placement is non-problematic. Where this game places Station Square is interesting however. The island we identified with West Side Island on the Shadow the Hedgehog map is southwest of another smaller island, just like the Mystic Ruins are southwest of Station Square on the Chronicles map.

From this we can construct a composite map of the locations in Sonic 1, Sonic 2, Sonic 3, SA, SA2, Sonic Battle, and Shadow the Hedgehog. Most of the other early games feature similar locations that we can use to fill in further details.

This excellent fan made map I found while researching this topic reaches similar conclusions.
http://i53.tinypic.com/10xar6o.png

There are a couple other maps in the series we can look at.

Here in Sonic Rush we see Cream's house is located on the same landmass as Tails' workshop. Since Tails lives on West Side Island, we can conclude Sonic Rush takes place there. Mirage Road would therefore be located in the Sand Hill desert; Huge Crisis is probably somewhere around the remains of Prison Island's naval base; Night Carnival is another iteration of Casino Night Zone.

In Sonic Advance 2 we see that Cream and Vanilla live on this island; based on the above we would conclude that the island in Sonic Advance 2 is West Side Island. We see Eggman's Techno Base on an adjacent landmass; this is probably the Blue Ridge Zone island where Metropolis is located in Sonic Chronicles, and Techno Base and Metropolis are different names for the same location. Leaf Forest appears to be the place where Cream lives; Leaf Storm, the forest near Cream's house in Sonic Rush, is most likely the same area.

In the Game Gear version of Sonic 1 we get a decent view of South Island. In that game the Green Hill Zone leads to a place called the Bridge Zone; in Sonic Advance, Neo Green Hill Zone ends with a bridge that leads to the Secret Base Zone. Coincidence? I'd assume that the Secret Base Zone is located somewhere on South Island, like Starlight City. Casino Paradise could be in Spring Yard- or the action might have moved away from South Island after this point, as the background of Casino Paradise shows a river or an ocean.
http://i53.tinypic.com/10xar6o.png

Nicely Done! I was a bit skeptical at first, but your theory is extremely well reasoned, I just wish I could read Japanese so I could confirm your research. One thing, I doubt that Central city is on Westside island, I just dont see the capital of such a large and important nation being on an island, but its probably really close to it, if your research is to be believed. Still you've obviously done a lot of research for this and would be curious to hear more of your ideas. In your opinion where on the map would you say the riders games take place. The map you showed has it on some out of the way island but I havent seen any research to back that up. I personally think that it would likely be in the Sonic equivalent of Africa, because of the games' use of Babylon Garden. As you probably know, in the real world, the Babylonian Empire conquered a large number of areas in that part of the world. If you pay attention, the world of Sonic has many parallels to our own real world counterpart, with many of its most iconic locations being based off of real locations. Sonic Team specifically used South America as inspiration for the Mystic Ruins, City Escape is literally San Francisco, Prison Island is based off of a real prison called Alcatraz, Soleana is based off of Venice, a city in Italy, not to mention that Japan has been name dropped in Shadow The Hedgehog, showing that some parts of the real world also exist in Sonic's world. That's not even mentioning Sonic Unleashed, where every level is based off of somewhere in the real world, and lets not forget Studiopolis, a real studio that Sega has used for the creation of Sonic games in the past, which got its own level in Sonic Mania. Plus the geography of that map shows that the world of Sonic has the same basic geography as the real world, but the terain is just different. If there is a reason why you believe its elsewhere, I would love to hear it and take a look at your notes.
Top
Post Reply
4 posts • Page 1 of 1