"To catch a shadow"- The Ultimate Life Form conspiracy

General stuff to do with the blue blur! Talk about him, his friends, the TV show, whatever you like!
Warning! This topic is 1 year and 9 months old! Please consider opening a new topic rather that bumping up this very old post.
Post Reply
30 posts

The search for the true Ultimate Life Form part 3: The Prototypes and the Black Arms

Agent Rouge wrote: The Chaos Drives were based on research results of the Chaos Emeralds, and the experimental attempt to apply that infinite energy to life functions was successful. Shortly thereafter, the project lead to completion of a single prototype. Focusing on its restorative ability, the Ultimate Lifeform's prototype, which was modeled after a lizard, showed signs of phenomenal growth, as well as self-recovery and self-replication.

As we all know, the Chaos Emeralds were first discovered 4000 years ago by the Knuckles Clan in the area that would one day become the Mystic Ruins, enshrined on a stone edifice protected by the entity now known as Chaos. Chaos was a Chao that (by accident or design) had been transformed into a virtually indestructible liquid organism by the energy of the Emeralds, and he guarded his kind that nested around the shrine with fierce resolve. When Pachacamac's warriors slaughtered the Chao, their enraged parent absorbed the energy of the Chaos Emeralds to transform into a monster and annihilate the Knuckles Clan in retaliation. The few survivors memorialized the cataclysm in a mural deep within the Lost World Temple.

With the Knuckles Clan defeated and Chaos sealed within the Master Emerald, their rivals (who we now call the Nocturnus Clan) were able to seize the Chaos Emeralds. Desiring to harness their power, they created the Gizoid, an Ultimate Being that could absorb Chaos Emeralds just like Chaos. This proved to be their undoing as the Gizoid became a god of wrath and layed waste to the Echidna's empire. For this sin the Nocturnus were imprisoned in the Twilight Cage. Those who remained behind recorded the tragic history of their race on a stone tablet as a caution to future generations.

The artefacts of the Echidnas were eventually rediscovered by Gerald Robotnik. With the knowledge of the ancients he was capable of working miracles. One such miracle he was asked to perform was to destroy death itself. To do this he turned to the Chaos Emeralds. From the Knuckles Clan he knew that Chao could be altered by Chaos Energy to become completely immortal beings; from the Fourth Great Civilization he learned that an artificial being could fully control the infinite power of the Emeralds. 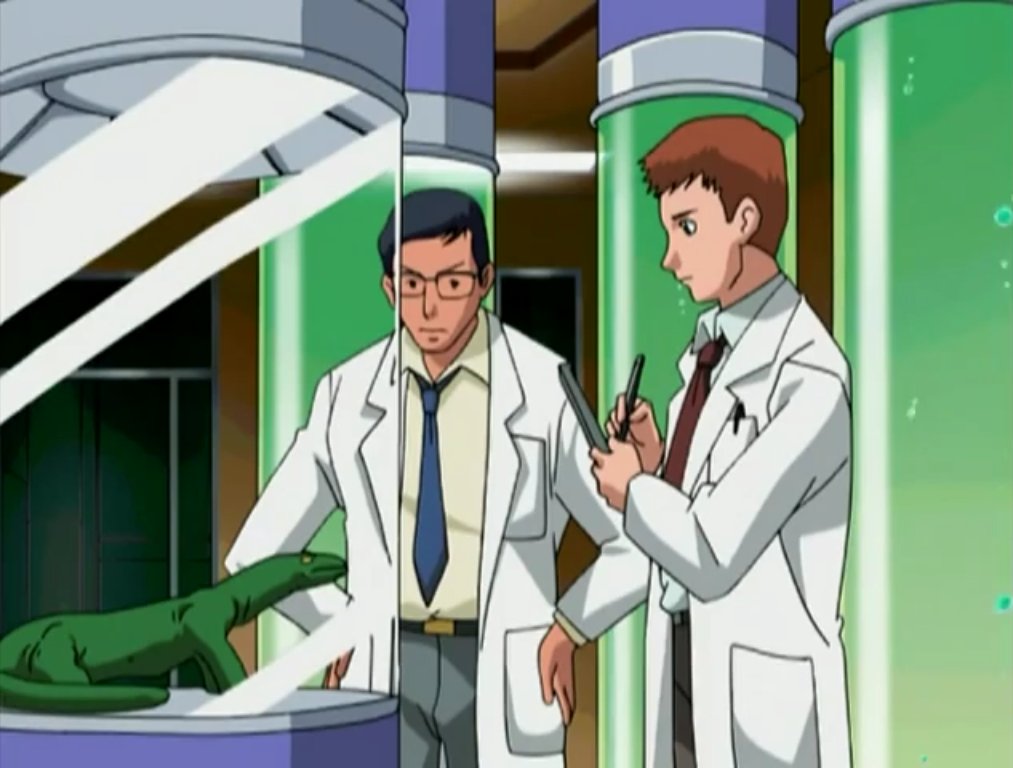 The very first prototype was modeled on a lizard. Lizards are known for being able to regrow their tales and some species can reproduce via parthenogenesis. In this way they approached the self-regenerating abilities of the Chao, who can avoid death by reincarnating as newborn eggs.

Initially the prototype Shadow, or Biolizard, seemed promising. However, its regenerative abilities caused it to grow to uncontrollable size, and it's Chaos Energy based biology was impossible to sustain without a life support system. Its offspring were unviable as each would require it's own life support; the unhatched eggs accumulated as waste. It's unruly behavior became increasingly distressing to the research staff.

While the first prototype continued to be a source of concern, work began on a second phase of prototypes. These would attempt to follow in the Gizoid's footsteps as machines that could imitate the abilities of the great Chaos himself. This model would adhere most closely to the physical characteristics of Chaos 0. Mechanical brains with bodies of liquid, the Artificial Chaos were able to mimic the shapeshifting powers of the original Chaos to a limited degree, some even dividing into remotely controlled cells. Whereas their sister the Biolizard was dependent on a constant drip of Chaos Energy to stay alive, each Artificial Chaos ran on a single Chaos Drive practically indefinitely.

Despite these positive results, the Artificial Chaos were also inadequate. Their dissimilarity to flesh and blood creatures made their value to Project Shadow's medical directives questionable, and like the other prototype they began to grow uncontrollable as time went on, as we later saw in Lost Impact.

However the prototypes had served their purpose by the time Gerald moved on to the third and final phase of Project Shadow. It is possible he arrived at this model while studying the Master Emerald Shrine- which we know he must have done to create the replica in Cannon's Core- where he would have stumbled across the prophecy depicting a golden warrior wielding the power of the Emeralds. Can it be that seeing this image of an ideal vessel for the infinite energy of the Chaos Emeralds spurred Robotnik to fulfill the prophecy himself?

The Adventure games' attention to detail was meticulous enough that I have no problem believing they would have thought of this. There are literally dozens of tiny story references to S3&K in those two games. The mural from Hidden Palace no doubt inspired the Lost World mural from SA and the countless hieroglyphic textures in the Pyramid themed stages from SA2.

The real question is how the hints pointing towards Sonic being the Ultimate Life Form square with post-Sonic Heroes continuity making Shadow the one lone Shadow.

We know for example that Shadow was originally absent from Sonic Heroes because he was still dead, so it isn't a stretch to conclude the story we got in Heroes/Shadow the Hedgehog is a retcon of what was developed in SA2/Sonic Battle. How much of a retcon it actually is remains an open question though. I pointed out that most of the characters who exposit about Shadow's past are unreliable, so what we think of as the facts are more flexible if we keep in mind that flashbacks might be inaccurate or deliberately deceptive. In the light the post-Sonic Heroes games aren't necessarily incompatible with the Shadow Saga's original intent.

Still, how much of Shadow's past is anticipated in SA2, and how much was made up later? Were the Black Arms always part of the plan for example?

Earlier Sable posted a screenshot showing background text in SA2 that appears to allude to the Black Arms. In support of this, consider that Eclipse Cannon's purpose isn't explained properly until Shadow the Hedgehog, where it turns out to was intended to destroy the Black Comet. If we ignore the Comet's existence how do we account for the Eclipse Cannon? There are other small details, like the similarity between the Biolizard's appearance and the Black Arms' thorny black and crimson hide. 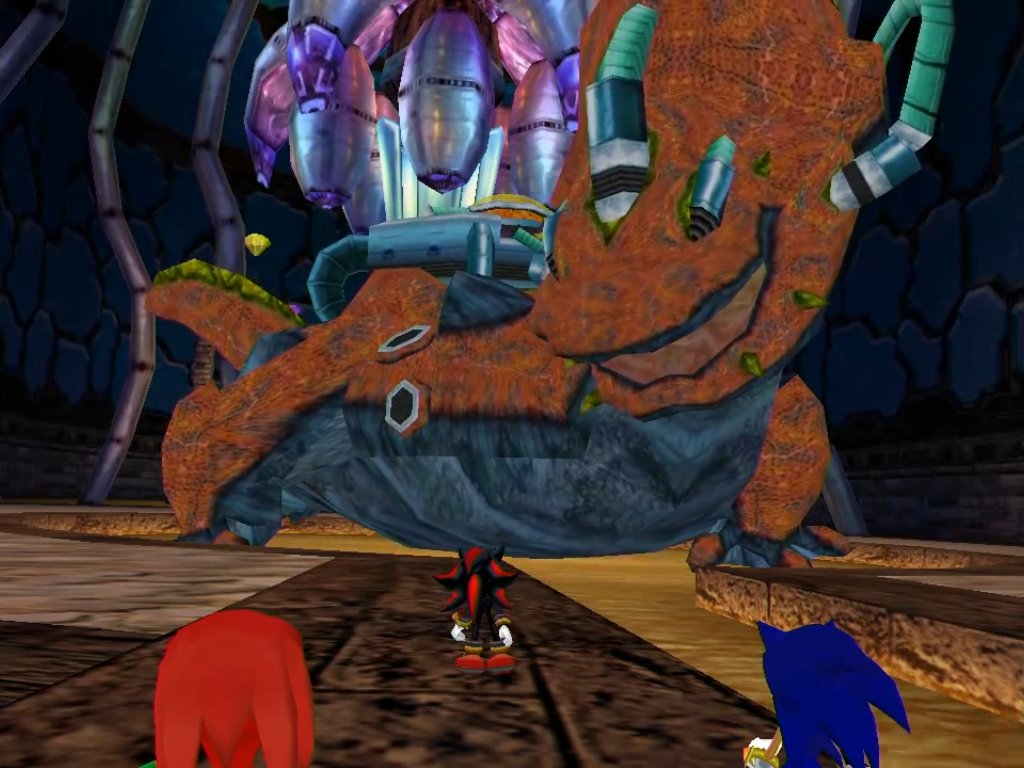 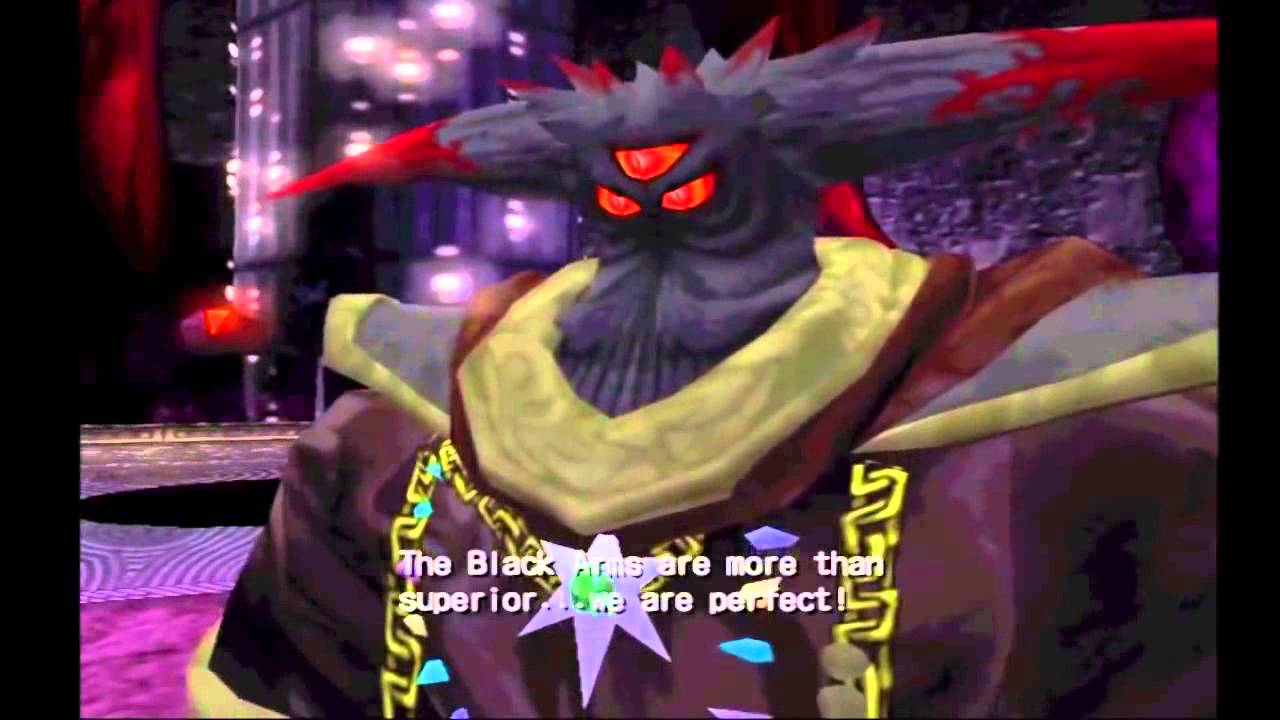 This prompts us to consider that the Biolizard may have been produced from splicing Black Doom's DNA with that of the test subject lizard. If so we'd also have to conclude that Doom wasn't lying when he said Shadow shared his blood. We know Sonic doesn't have Black Arms genes because he was effected by the paralyzing gas. That doesn't rule out the possibility that Sonic is the real Ultimate Life Form, since the second line of Project Shadow- Artificial Chaos- does have certain features in common with Sonic. The two pedigrees of Project Shadow prototypes are distinctive enough that it isn't hard to imagine they both produced a separate Ultimate Life Form.

We know the original Shadow was created for peaceful purposes before Robotnik went mad, and the thing created on Prison Island was an instrument of vengeance. It makes sense that the one who was supposed to gift immortality to the world was free of Black Doom's influence, while the living weapon designed to destroy the world would be born from humanity's nemesis. It suited Gerald's agenda: even if no one took the bait presented in the diary, Black Doom was certain to seek out "his" Shadow and allow the Emeralds to be gathered into the Eclipse Cannon, guaranteeing the alien's death as well as mankind's.

Another possibility besides Shadow being created on Prison Island is that he and Sonic were both completed on the ARK at the same time.

In the anime it doesn't make much sense, given that Sonic lives in another dimension, but the implication seems to be that Sonic was also the Ultimate Life Form in that continuity. Sonic X was released before Heroes and doesn't reflect the alterations that game made to the Shadow narrative. In the games we never see the ARK raid from any other perspective besides Shadow's, and his memories are tampered. It's not impossible that what really happened 50 years ago is much like the recollection the soldier gives in Sonic X.
http://i53.tinypic.com/10xar6o.png

All of this is actually a great analysis. Glad to see I'm not the only person over-analyzing these games!

To quote 12 year old me's thoughts on you from 6 years ago:

Dude, you're like a Sonic GENIUS! You seem to know everything about this! You Rock!

Rhys Coker (SB) wrote:Goku then teleports us to the Great Wall of China, where we meet up with Knux, who we learn is dealing with depression and suicidal thoughts as he jumps straight into a tornado.

Too bad sega won't put this kind of story detail in their games now.
Top

^I thought Sega's other franchises were generally considered to have competent Story telling and that it's only Sonic where they tend to fall flat on their face whenever they try for epic tales.

That said, this continues to be a very compelling interpretation.
Top