Chao are described as living, prehistoric creatures not possessing the ability to decide their own course of evolution. They are fragile, fleeting, and consequently a pure and lovable life form. Typically they live by clear water, and they adapt to survive in various environments very well being able to capture features of other life forms that they touch. Watching their exceedingly cute behavior is relaxing. 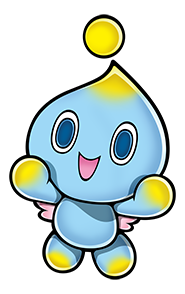 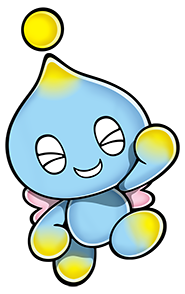 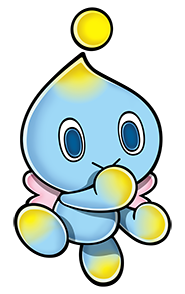 The earliest we know of Chao is thousands of years before the events of Sonic Adventure. The guardian of the Master Emerald at this time was a beast known as Chaos. Chaos was actually a mutated Chao, who possessed high intelligence and abilities that far exceeded the others. Although Dr. Eggman referred to it as “The God of Destruction” in the game Sonic Adventure, it actually has a gentle personality. It profited from the power of the seven Chaos Emeralds situated around the altar of the Master Emerald. They guaranteed clear water around the altar and protected its race from foreign tribes.

However, as seen in the story of Sonic Adventure, the ancestors of Knuckles were a war-like tribe who slaughtered many of Chaos’ fellow Chao in order to plunder the Chaos Emeralds. This caused the enraged Chaos to go berserk, absorbing the 7 Chaos Emeralds and transforming into Perfect Chaos. This caused heavy destructive floods and destroyed the civilisation. 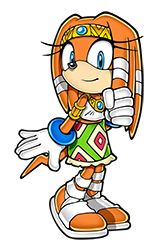 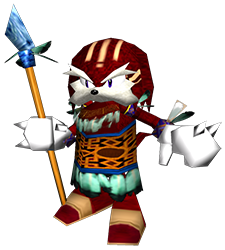 This tribe was lead by an echidna named Chief Pachacamac, who had intentions to conquer other countries. Pachacamac had a daughter; a kind, gentle echidna named Tikal. She did not discriminate against anyone she met and she cared for and looked after the Chao around the altar. She also spent time trying to communicate with Chaos, who was feared by the rest of the tribe for its strangeness. She was able to befriend Chaos and gained the trust of him and the Chao.

She was always critical of her father and opposed to his evil intentions. When the tribe eventually attacked the altar sending Chaos berserk, she linked her conciousness with Chaos via prayer, and they were sealed inside the Master Emerald, for the sake of not repeating the tragedy if and when Chaos was ever to return (and he was, by Sonic at the end of Sonic Adventure).