Chaos is a mutated Chao, who possessed high intelligence and abilities that far exceed the others. It is a powerful and mysterious higher being. Although Dr. Eggman referred to it as "The God of Destruction", it actually has a gentle personality. It profited from the power of seven Chaos Emeralds, situated around the altar of the Master Emerald. They guaranteed clear water around the altar and protected the inhabitants from any intruders.

Chaos is formed of a blue liquid-like substance which it can mould to any shape. Generally, it seems to remained in a full liquid puddle state, and transforming to an humanoid version of itself when needed to. This form is it's most common form, and is the form which is whay Chaos Chao are based upon. You can see its brain through its transparent head.

In recent times, after unveiling ancient stone tablets describing the destructive water-like beast, Dr. Eggman shattered the Master Emerald releasing Chaos and persuaded him to help him with his plans for world domination. After Eggman's plans fell through thanks to Sonic and his friends, Chaos absorbed the negative energies from the Chaos Emeralds becoming Perfect Chaos once more. To fight Perfect Chaos, Sonic absorbed the positive energies of the Chaos Emeralds and transformed into Super Sonic and defeated him. Perfect Chaos transformed back into Chaos and Tikal once again sealed herself away, taking Chaos with her. Neither Chaos nor Tikal have been seen since.

It is revealed during each of the main stories that in the past, Tikal had initially met Chaos under peaceful conditions. She became a friend to the chao and by extension him. However, when she found out about her father Pachacamac's plan to steal the emeralds to gain power, she attempted to tell Chaos to flee, but as the guardian of the shrine Chaos could not leave the place. When Pachacamac attacked the shrine, he barged past Tikal and the Chao, enraging Chaos and causing him to harness the emerald's energy to become Perfect Chaos. 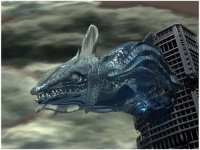 Chaos is featured in Sonic Adventure 2 Battle versions as a playable character in Multiplayer Treasure Hunting battles. He is slow but has a large radius when it comes to attacking enemies. His description mentions how he is 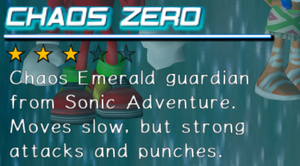 Multiple fake copies of Chaos are present throughout the game as Infinite summons them.

One notable instance is when Tails is working on fixing E-123 Omega, but is interrupted when Chaos appears out of a manhole. He reaches out to attack Tails with an outstretched arm before being squashed by Classic Sonic.

Chaos has their own page on Sonic Channel, which is written in Japanese.[1] Full text:

Chaos has an entry in the Sonic Chronicles Codex, under Perfect Chaos.